As I attempt to get back on the beat after a fabulous (but not yet over) Canadian summer, I decided to empty the mailbag.  Simply put, I have veritable treasure trove of new music that I have had no chance to do much about.  Having said that, we will attempt to empty the bag by starting oldest to newest and plowing through them with you the reader, until they are done. 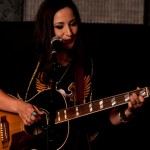 First up, we have Gena Perala, a Canadian artist out of British Columbia.  She is a mufti-talented type who not only writes and performs her music, she also writes poetry, with 3 books to her credit.  Very impressive.   The song I am featuring is from her second album, “Exactly Nowhere”.  The song is “Living Proof”.   A fine ballad, featuring Gena playing the piano and belting out her tune.  Nice song, well produced.

If you want to learn more about Gena, hit the links